Domesticated more than 6,000 years ago in China, hemp produces more than 400 different organic compounds. The two main groups of biologically active molecules contained in hemp are terpenes and cannabinoids such as cannabidiol, or CBD.

Cannabinoids are chemical compounds that can affect the functioning of the human nervous system. Hemp biosynthesizes over 60 of them. The main cannabinoids are tetrahydrocannabinol (THC), cannabidiol (CBD), and cannabigerol (CBG). These compounds differ in chemical structure and action.

Cannabidiol, or CBD for short, is one of the cannabinoids found in the highest amount in hemp. CBD is thought to have many therapeutic uses and helps to relax. While acting to benefit well-being, CBD does not have the psychoactive properties of its famous cousin THC and should not be confused with THC. In fact, CBD and THC are as different from each other as day and night in terms of their effects on the psyche.

Does CBD cause intoxication?

No, CBD does not cause intoxication. CBD is non-psychoactive. In other words, after using CBD oil, you do not experience significant changes in mood, consciousness, or an altered state of mind.

Is CBD right for you?

CBD oil is becoming a popular dietary supplement. It can be used as one of the naturally derived compounds that improves quality of life. However, as with most natural compounds, reactions to CBD vary on an individual level. You won’t be able to tell if it will improve your mood and alleviate or completely eliminate a problem until you use it.

To help you make an informed choice, we suggest looking at some unbiased sources of non-commercial information such as Wikipedia and reputable medical websites. You can also follow the links to medical studies on these sites.

Despite numerous studies on a wide range of CBD dosages and administration methods, CBD has not been found to have any side effects.

How to use CBD?

Regardless of the mode of intake, a typical dose of CBD oil should be a few drops administered three times a day under the tongue. According to a recent study, up to 600 mg/day is tolerated when taken orally.

CBD can be administered using traditional supplement administration methods. It is most commonly administered through the skin or orally, which allows the biologically active substances to come into contact and be absorbed.

CBD can have an unpleasant taste. If there are concerns about using too much in one serving, you can apply the oil with a pipette to a clean palm and lick it off. You can also apply the oil with a dropper to a food that exhibits absorption properties, such as a slice of bread or your favorite cookie, and eat it.

How does CBD work?

One of the receptor systems is called the endocannabinoid system (ECS). Receptors belonging to the ECS are located in the human brain and in the peripheral nervous system – the spinal cord and nerves. In the brain, cannabinoid receptors are located in areas responsible for perception, concentration, memory and movement. Here’s why the ECS is involved in regulating many physiological processes, including pain sensation, mood, and appetite. Interestingly, this system is also part of the neural system responsible for responses to exercise. “Intoxication/excitement in runners” is due to the action of the ECS.

ECS receptors include: CB1 and CB2, 5-HT1A, μ and δ. These receptors bind endorphins – cannabinoid-like molecules produced by the nervous system. One endorphin molecule that transmits signals in the ECS is 2-Arachidonylglycerol (2-AG). It is bound by CB1 and CB2 receptors. The cannabidiol, CBD, is also bound by these receptors and it then mim ics the effects of 2-AG.

CBD is bound by the same receptors as the psychoactive THC, but has opposite effects. While THC intensifies the activity of the nervous system, CBD decreases its activity levels.

Research results show that CBD has antispasmodic, neuroleptic, anticonvuls. ant and neuroprotective effects. Hence, using CBD in the form of oil is a good way to relax your muscles and generally unwind. CBD also relieves daily stress and makes the nervous system more calm. Scientific studies show that CBD is a very promising substance that also has applications in cancer therapy.

Biological and chemical aspects of CBD 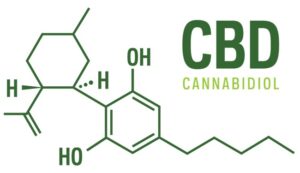 Hemp (Cannabis sativa L.) produces a wide spectrum of organic compounds, THC and CBD among them. Like many other crops, they are suitable for producing large quantities of a wide variety of molecules. Cannabis sativa are grown selectively for a variety of reasons. As a result of cultivation, the original variety has been split into different cultivars with different properties (Brussels sprouts and cauliflower from wild cabbage are similar examples). Current cultivars of cannabis (marijuana) are focused on producing as much THC as possible to the detriment of other useful compounds. On the other hand, cultivars of fiber hemp(hemp) for industrial use are intended to produce large amounts of CBD to the detriment of THC.

Cannabinoids such as THC and CBD are closely related to plant-derived compounds called terpenoids such as menthol, camphor, and curcuminoids found in turmeric and mustard seeds. Terpenoids constitute a large category of organic molecules widely used in traditional cuisine for their aroamtic properties. They also play a significant role in traditional herbal medicine.

THC and CBD are produced using the same biological synthesis pathway. In other words, they are derived from the same precursor, cannabigerolic acid, CBGA. When the precursor is available, the enzyme, CBGA synthase forms an additional ether bond and converts to THCA, which when decarboxylated forms THC. In a parallel pathway, CBGA synthase converts the CBDA precursor to CBD.

Please visit me at: